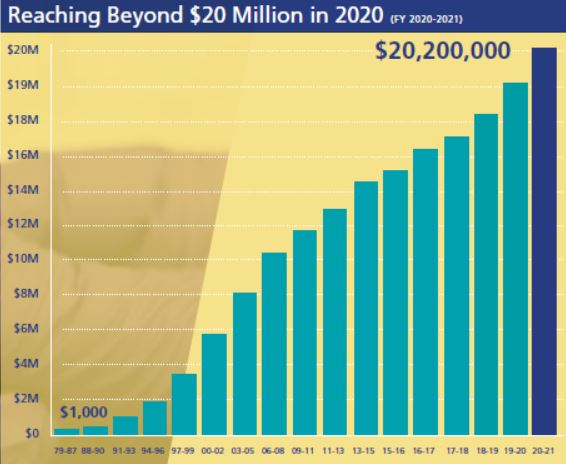 For its foresight in supporting nursing scientists at the doctoral level, the Seattle chapter of ARCS Foundation was honored by the UW School of Nursing with the 2017 Peter Dyer Heart Award. Dr. Nancy Woods, emeritus dean at the School of Nursing, presented the award to Marcia McGreevy Lewis, 2015-17 ARCS Seattle chapter president, at the Nursing Recognition Banquet on May 10. 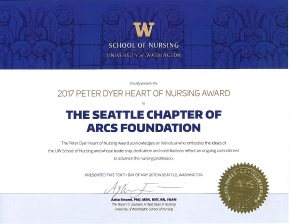 Remarks by Woods captured the impact of this support: “The Seattle chapter was the first ARCS chapter to offer fellowship funding to a Nursing Ph.D. program nationwide. In fact, when I was dean of the UW School of Nursing, I saw the hard work it took to recognize nursing students as true scientists conducting bench research.” Getting ARCS Foundation National’s approval for rewarding fellowships was unprecedented. The fortitude of these efforts in 2006 was led by ARCS board members including Micki Flowers, Joanne Montgomery and Maggie Walker. Three other ARCS chapters support nursing now, verifying the impactful career that nursing is.

Subsequently, in the past 11 years, the careers of 16 scholars have been launched with the support of ARCS Foundation Seattle Fellowships. Of those, three are current faculty members at UW School of Nursing. Others are rising stars at other universities and medical centers, including such esteemed organizations as Pittsburg University, DePaul University, Seattle University and the Veterans Health Administration.”

In recognition of our long-standing support of science education in Washington State, the Washington Chapter of the Association of Fundraising Professionals (AFP) chose ARCS Foundation Seattle for its Outstanding Philanthropic Foundation Award for 2006. The award was received in Seattle at AFP Washington’s National Philanthropy Day celebration, one of several special commemorations held by AFP chapters throughout the United States. In honoring ARCS Foundation Seattle, AFP Washington singled out the importance of our support in recruiting the best and brightest scholars at both the University of Washington and Washington State University. “The Seattle Chapter is one of the most successful chapters in the nation,” AFP Washington noted, “and consistently ranks among the UW’s most generous annual donors.”